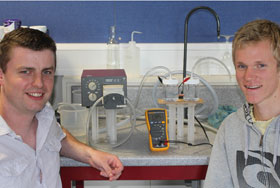 University of Waikato scientists are hoping to create a smart water meter, completely powered by the water running through it.

They’re looking to create a charge separation through the use of a streaming potential cell, and are hoping to harvest enough power to run a smart water meter that can wirelessly report water consumption.

How the cell works

The cell works by forcing water through a glass micro-channel that has a charge bound to its surface. As water travels through the channel, ions of an opposite polarity cling to the charged surface. When pressure pushes these ions through the channel a useful amount of electricity builds up.

“In engineering terms, this is a chance to achieve something practical from an effect that has to date been no more than a curiosity from the world of physics,” says Professor Scott.

Summer Research Scholarship student Wayne Crump is looking at creating the best design for the cell.

“I’ve been looking at the height of the channel and how much pressure we use to force water through affects how much power we’re getting - seeing what’s the best way to generate power.”

Water meter to power itself

Optimal design of a streaming potential cell is intrinsic to PhD student Mark Jones’ research which aims to create a water meter that generates its own power.

“So far we’ve recorded a total of 30 millivolts with our prototypes, and to put it into some context, a low power microprocessor can run on 900 millivolts.

“I'm investigating whether it will be possible to use these means of generating electricity to run a smart water meter,” says Mark.

“If we can harvest energy from the water we're metering then we remove the need for batteries, which is what current smart water meters need. Not only will this prevent thousands of batteries ending up in landfills each year but also save having to replace them, a much greener alternative."