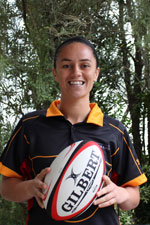 The University of Waikato Rugby Club is leading the way for women’s rugby in the region.

After an influx of players joined the university women’s club last year, women’s rugby has grown in the region to the point where the Waikato Rugby Union has confirmed sponsorship for a women’s NPC team.

The university club made a comeback in 2011, the initiative of former University of Waikato sport manager Crystal Kaua and her NZ Māori Sevens team mates and Black Ferns Victoria Grant and Teresa Te Tamaki.

Waikato Rugby Union Chief Executive Graham Bowen says after a six-year absence, the union is delighted to be able to enter a team in the NPC competition.

“This is a result of the very hard work that a group of Waikato University women have put in to get us in a position to support a provincial team,” says Bowen.

“Some time ago Waikato was one of the strongest provinces in women’s rugby and we’re pleased that it’s showing signs of rejuvenation.”

Provincial team something for young players to aspire to

“It’s great that key people are working together to create opportunities for girls and women’s rugby in our region. The sport is growing because of the new opportunities ahead like the Olympic Sevens and the new NZRU Women’s Rugby strategic plan, so it’s a great time to be a women’s rugby player."

Varsity team help bring Waikato women’s rugby back to the NPC is licensed under a Creative Commons Attribution 4.0 International License.