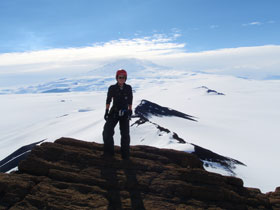 Antarctica to Oregon: University of Waikato student Tanya O'Neill has been awarded a Fulbright Travel Award to present her Antarctic research in Oregon.

University of Waikato PhD student Tanya O’Neill has been awarded a Fulbright Travel Award to present her research on the effects of human activity on Antarctica.

Tanya has been researching the effects of human activity on the Antarctic soil environment for the past four years, and has based a lot of her research on her three trips to the continent.

She will present her work for the first time internationally at the Scientific Committee on Antarctic Research (SCAR) conference in Portland, Oregon, next month.

“My research looks at the direct and cumulative impacts of visitor activity - including scientists and tourists - on the desert pavement surfaces in the Ross Sea region of Antarctica.

“I’ve been to Antarctica three times now; the first was when I ran a marathon with my uncle in 2007, and on that trip I began to question our impact on the Antarctic environment.”

After the marathon she was alarmed by the damage done on the western side of King George Island - reached by a day and a half's boat ride from the bottom of South America – by the Antarctic runners.

One aspect of her research aims to find out whether the environment can recover between summer seasons or whether the effects of tourists are cumulative. About 40,000 tourists visit the Antarctic Peninsula a year.

"It was after the run, and in hindsight, that I began to question it – 160 runners, running the same course each year, leaving it visibly disturbed. Can the environment recover before the ground freezes again at the end of summer?”

Her work could be important in future-proofing the Ross Sea region – the New Zealand part of Antarctica – by increasing our understanding of between-site differences in vulnerability, resilience, and rehabilitative capability, hopefully resulting in better management decisions and minimising future impacts to the environment.

While attending the conference Tanya will meet up with the Spanish expedition she will join later in the year for her fourth trip to the continent.

The SCAR conference takes place between 16-20 July. Tanya will present her research on 18 July.