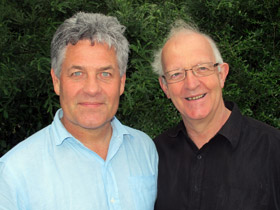 University of Waikato composers David Griffiths and Michael Williams will represent Oceania at the international Volcanic Lakes Festival in Italy this February - the only performers from the South Pacific.

“It’s a real honour and privilege to be asked to write something for this wonderful festival,” said Williams.

“David and I are the sole representatives from this side of the world with composers from America, the UK, Korea and Egypt also attending.”

Just north of Rome, the festival takes place over three weekends at five volcanic lakes. Each of the lakes has a legend attached to it and composers were assigned lakes and legends as the basis of their compositions.

Williams was given Lake Bolsena and the legend of Queen Amalasunta.

Griffiths was asked to compose and direct a hymn to a text, Trace, by Maria Lanciotti that will be presented at each of the concerts.

Griffiths, who is one of New Zealand’s leading baritones, will also give a recital in Rome singing works by Bellini, Mozart, Schubert, Brahms and Rossini.

“It is such a wonderful opportunity to represent New Zealand in the birthplace of so much European culture,” said Griffiths.

Williams will also use the opportunity re-visit Montecassino, the location of his recently finished opera The Juniper Passion with a view to garner interest for an Italian performance.