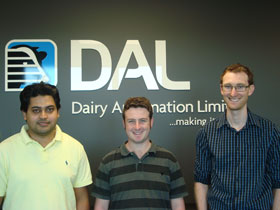 The University of Waikato’s science and engineering work placement programmes often result in students securing full-time work before they graduate.

Such is the case for three current Dairy Automation Ltd (DAL) employees, who each found full-time jobs with the company following electronic engineering degrees and work placement programmes at the University of Waikato.

The most recent employee, Mark Wilson completed a work placement at Hamilton company DAL, last year. He is now employed with DAL as a full-time production technician.

Mark’s manager Richard Doohan completed his studies in 2005. Following his degree Richard worked at Sensortec Ltd (a company which would later form Dairy Automation Ltd) for two and a half years, where he completed the requirements for his final work placement, before moving to DAL as the technical manager for building, production and research and development.

Like Mark and Richard, Chetan Jairaj scored his job the same way. Chetan was Mark’s workplace supervisor. He completed his Bachelor of Engineering degree in 2010 and maintained his employment at DAL. Currently Chetan supports both production and R&D as a production engineer.

“It’s encouraging to see that the work placement programme at Waikato now has such a long history,  that former graduates of the programme have since moved into significant management roles and are employing the new generation of students for work experience,” says Dr Karsten Zegwaard, University of Waikato Work Placement Coordinator.

Mark’s main role at DAL involves technical assembly of the products and supervision of the production team, alongside work mate Chetan. It was his technical competency and professional attitude during his placement that helped him to secure full-time employment in the production room upon completion of his study.

As for study, Hamilton Boys’ High old boy Mark didn’t plan on a university career and had intended to train as a tradesman. Yet when a mate pulled him along to the university’s Engineering Open Day, Wilson decided Waikato was for him. During study the social environment of the degree was the highlight and he enjoyed the team work during projects such as the first-year engineering Boat Design Competition.

Cooperative education is the combination of study and work and allows students to gain industry experience while gaining credit towards their degree and being paid for their work. The work placement programme is a compulsory element of both the BSc(Tech) and BE degrees at Waikato University.