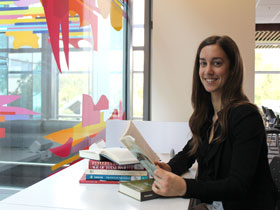 Oxford bound: Waikato University graduand and Rhodes Scholar-elect Briar Thompson, who will graduate in May, will head to Oxford University later this year to study for two masters degrees.

University of Waikato graduand Briar Thompson is heading to Oxford University in the United Kingdom to chase her dream of working for the UN.

Briar is one of three New Zealanders to have been awarded a Rhodes scholarship to attend Oxford University this year.

A public relations major while at Waikato, Briar is Oxford-bound to study a one-year MSc in Refugee and Forced Migration Studies followed by a one-year MSc in Global Governance and Diplomacy. Afterwards she hopes to work in a policy role and eventually work for the UN refugee agency.

She is particularly passionate about finding policy solutions for Pacific Island communities at risk of becoming forced migrants as a result of environmental changes.

“I have always been interested in Human Rights and International Relations,” says Briar. “At intermediate school I looked up what I needed to study to work for the UN and saw that it involved having an undergraduate degree, MSc and many years of experience working with refugees.

“At the time it seemed so far away so I pushed it to the back of my mind, but now it’s a real possibility.”

As well as studying at Waikato, Briar has also worked hard in the community to make a difference. She was on the Young People’s Reference Group for the Office of the Children’s Commissioner, has been a Māori mentor at Waikato University, and has volunteered with Refugee Services to assist the resettlement of a Colombian family who arrived in New Zealand last year.

Briar leaves in September for international student orientation at Oxford, but still has plenty to organise before she gets there.

“I’ve only recently received my acceptance letter from Oxford. Until my enrolment is final I am only a Rhodes Scholar elect. I’m still waiting to hear which College I will be part of, which will also determine my accommodation, but once that has been finalised I will officially be a Rhodes Scholar.  Then flights will be booked and it will all start to seem very real.”

Briar is a "deserving recipient" according to adviser

Rhodes Scholarships constitute the pinnacle of achievement for university graduates wishing to pursue postgraduate study at one of the world’s leading universities. The awards are administered by Universities New Zealand – Te Pōkai Tara.

One of Briar's previous academic advisers, Associate Professor Shiv Ganesh, says he’s absolutely delighted with the Rhodes Scholarship award. “Briar is truly one of the most outstanding students I have encountered in the 17 years that I have taught at the university level, both here and in the United States,” he says. “I cannot think of a more deserving recipient than she.”