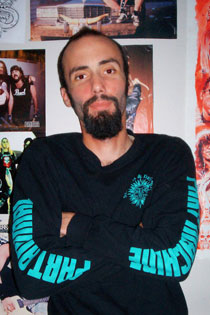 Bogan expert: Waikato graduand Dave Snell has completed his PhD study of bogans' identity and community and will graduate this week at Founders Theatre.

It’s pretty easy to spot a bogan – their clothes and the symbols on them, their tattoos and hairstyles, their cars and the thrashing heavy metal music, but a doctoral study of bogans by Waikato University student Dave Snell reveals that underneath, they’re not so different from the rest of us – they just look different.

Snell, a bogan himself, caused a small stir in 2007 when he was awarded a doctoral scholarship of almost $100,000 to study every day bogans’ identity and community amongst heavy metal fans.  He’s now completed his study and will graduate this week at Founders Theatre in Hamilton.

His study focussed on how bogans develop their identity and function in the community, and he also looked at their online presence.

“Physical appearance is obviously an important factor, a key way they express themselves but actually, like everyone else, they behave differently in different groups,” says Snell.

He is currently working in the research office at Wintec in Hamilton and says everyone plays different roles as they move through days and weeks. “For instance I don’t dress like a bogan when I go to work.  We all dress and behave differently at work, when we’re at home or when we’re out doing different activities. Bogans, like everyone else, move through these affiliations.”

Snell studied how their membership in other groups influenced them as metallers.  As well as interviewing a cross section of bogans, he attended concerts with them and observed their interactions. “There’s a lot of the shared experience – it really was so normal – they go to the concert, wear the t-shirt and afterwards relive the experience through conversations,” he says.

“My research shows that you can’t just slot people into distinct personality types – like those psychometric tests that HR people sometimes use.  Our interactions shape who we are rather than us being born a certain way.”

Snell’s supervisor Professor Darrin Hodgetts says Snell’s research is valuable. “Really he’s used bogans as a case study to investigate community and identity. He’s contributed to our understanding of notions of identity, how we understand community and how we function within it. He’s done some good work.”

On- and off-line experiences were also a focus of Snell’s doctoral study.  He wanted to see if bogans used the online domain as a quite separate space – a platform for fantasy, but he says that wasn’t the case, and most people moved seamlessly between the real and online bogan worlds.

Work presented in Portugal and Switzerland

For Dave Snell, the doctoral scholarship meant he didn’t have to work part-time while he studied, as he’d done with his earlier degrees, and he was able to travel overseas to present his work at conferences in Portugal and Switzerland.  His current job is assisting other students with their research but he hopes to continue his own research at a later date.

Dave Snell will have his doctorate conferred on Thursday 3 May.

A digital copy of Dr Snell's thesis can be viewed on the University of Waikato's Research Commons here.