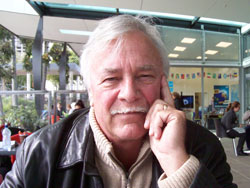 Professor Michael Peters: Recipient of an honorary doctorate from the State University of New York.

University of Waikato Professor Michael Peters has been awarded an honorary doctorate from the State University of New York (SUNY) Empire State College – a college with 20,000 adult students who study for SUNY degrees at 35 different locations around New York state and online.

Professor Peters, a New Zealander, has taught and lectured internationally and has been a visiting scholar on five different continents. He is new to the University of Waikato and currently teaches in the Department of Policy, Cultural and Social Studies in Education. He is also an Emeritus Professor at the United States University of Illinois at Urbana-Champaign and Adjunct Professor in the School of Art, Royal Melbourne Institute of Technology and School of Foreign Studies, Guangzhou University, China.

SUNY Empire State College President Alan R. Davis says the Honorary Doctorate of Letters is the highest form of recognition, given to people of exceptional distinction and Professor Peters is very deserving of the title. “He’s a visionary whose ideas expand our understanding of teaching and learning and of open education in all its forms.”

Professor Peters is committed to social justice and open education and has written more than 60 books on these and other educational topics. He is also the executive editor of the Australasian journal Educational Philosophy and Theory and editor of two international ejournals, Policy Futures in Education and E-Learning and Digital Media.

Professor Peters says he’s delighted to receive the honorary degree in the name of ‘open education’. “I’d like to herald the work, passion and commitment of individual faculty, mentors and administrators who, working collaboratively and in partnership, make possible a new vision of education based on genuine innovation, flexibility and alternative approaches to higher education to empower and transform learners.”

He says in times of economic survival, such openness stands for new ways of revitalising and enhancing the public status of our institutions, knowledge and learning as global public goods.

Waikato professor awarded honorary doctorate from US is licensed under a Creative Commons Attribution 4.0 International License.