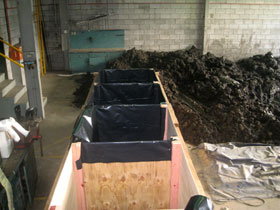 University of Waikato researchers have found fungi and plants that can reduce dioxins in contaminated land by up to 85%.

Researchers have found a combination of fungi in the soil and subsequent planting of poplar trees has reduced the toxicity equivalent quotient, which measures both concentration and toxicity of the dioxins, in sediment taken from the Kopeopeo Canal near Whakatane, by 85% within 15 months.

PCP was used in sawmills to stop sap-staining or blue stain in wood, but its by-product, dioxins, are harmful to people, animals and everything in the ecosystem, says Professor Farrell.

Some workers at the old Whakatane sawmill died and others continue to suffer side-effects of PCP exposure. For 30 years the Kopeopeo Canal received surface run-off and storm water from PCP producers and remains a contaminated site.

Today more than 36 sites around Whakatane are still contaminated and former mill employees and iwi have joined forces with the universities, Bay of Plenty Regional Council and SIG Combibloc to find ways to degrade the toxins.

“We looked at soil in contaminated sites for fungi, thinking that if a fungus was present in the soil and growing it would be resistant to the PCP and dioxins. We had the hypothesis that we could use these fungi to mediate the soil,” says Professor Farrell.

Thirty tonnes of contaminated sediment from the Kopeopeo Canal were excavated and various fungal and plant combinations were tested in the two-year programme, funded by the Health Research Council, and led by Ngāti Awa.

The best combination for reduction of dioxins was the sediments incubated with fungi and consequently planted in poplar trees.

“The one thing we need to do now is look at what fungi work best,” says Professor Farrell. “We are running experiments at the moment and should know within the first quarter of 2012.”

The programme also looked at how Māori and iwi will consider the final bioremediated soils.

“They want the land to be useable again for kai and that is our target as well, to get dioxin levels to zero and be able to have food grown in the bioremediated soil.”