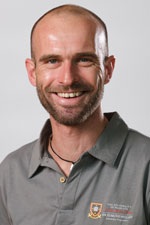 Dance: Simon Howie is returning to his passion for dance with help from the University of Waikato’s Sir Edmund Hillary Scholarship Programme.

Hamilton’s Simon Howie is returning to his passion for dance with help from the University of Waikato’s Sir Edmund Hillary Scholarship Programme.

The 32-year-old is one of 43 students selected this year for the programme, which awards scholarships to academic high achievers who show significant leadership qualities and also excel in sport or in the creative and performing arts.

Simon had a successful competitive ballroom dancing career in the 90s, claiming titles and podium placings in the National Championships in 1998, but took a break from dancing from 2000 onwards. In the past couple of years he has picked it up again with renewed energy.

“On a whim I took up Lindy-Hop lessons about 2 years ago, and I remembered, or realised, how much dance meant to me” says Simon. “Now I have decided to pursue my passion as a career”.

In his dance classes at university, where Simon is studying for a Bachelor of Sport and Leisure Studies, he is focusing on contemporary dance with choreographer and senior lecturer Karen Barbour.

“I find myself taking on challenging dance forms I never thought I could do,” Simon says. “With persistence and a whole lot of passion, I’m actually succeeding in learning these new arts. Overcoming challenges is the finest reward.”

Simon also attends a Zouk dance class every week in Auckland (Zouk is a dance similar to the lambada and is popular in South America and the French Caribbean), and teaches a Lindy-Hop class every Thursday night at the Celebrating Age Centre in Hamilton. Lindy-Hop, a swing-era dance form popular in the 1920s, 30s and 40s, is experiencing a resurgence now in the United States and Europe, he says.

Simon can sometimes be seen ‘Lindy-bombing’, dancing spontaneously in Hamilton’s Victoria Street with friends in a flash-mob.  Flash mobbing is when a group of people assemble suddenly in a public place to briefly perform some sort of act to entertainment and surprise passers-by. “You may see us on campus later in the year,” says Simon.

Lindy-Hop is not the only dance form enjoying a resurgence, with shows like Dancing with the Stars helping to popularise ballroom and partner-dance genres. When Simon was an apprentice dance teacher in the 90s, he taught two of the dancers who went on to perform on the first New Zealand season of Dancing with the Stars.

He says his mother is responsible for getting him interested in dance.

“She required a partner to attend some classes she was interested in. At first I thought it was the most uncool thing I could ever imagine to go and learn ballroom with my mother. But by the end of the first class I was completely hooked.

“I still love it and take my mum out for a waltz whenever I get the chance.”

Simon is currently in his second year of a Bachelor of Sport and Leisure Studies, with some theatre studies papers thrown in. He plans to complete a post graduate diploma in secondary teaching after completing his bachelor’s degree.

“I need a real career to come back to, and I love to teach almost as much as I love to perform. When I was a young man, dancing was not seen as an option for the typical Kiwi male. If I can make just one young Kiwi man see this as an interesting and viable pathway, I will be happy.”

Simon says he is extremely grateful for the support the Sir Edmund Hillary scholarship programme provides him.

“It means the world to me. The encouragement, extra support and know-how will be invaluable throughout my studies.”

Sir Edmund Hillary Scholarships are the University of Waikato’s most prestigious scholarships and are awarded to students who are high academic achievers and are also achieving in the arts or sport. Scholars have their course fees covered, receive specialist coaching and mentoring and take part in personal development and leadership programmes.