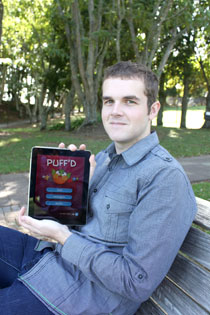 A team of students from Waikato University have developed an app to teach kids with asthma how to best manage their condition, with the help of a wee puffer fish called Sailor.

The game is part of a project aimed at raising awareness of asthma among 5-10 year olds. Asthma Waikato has links with Sport Waikato’s Project Energize to deliver Sailor the Puffer fish into every Waikato school.

PUFF'D, which is now available to download on the app store, sees Sailor the Puffer fish inside a pair of lungs bouncing into and destroying asthma triggers such as cold, pet dander and smoke.

Team leader Daniel Loomb says the students got involved as part of a software engineering paper which involved connecting with businesses in the community.

“The direction the game went in was set from the start by Asthma Waikato. They told us what they were looking for and we came back to them with a number of game ideas for them to choose from.”

“We met with Asthma Waikato every Monday for a whole semester,” says Daniel. “This was crucial in forming a solid relationship between us and the client. We would show them how our progress was going and they would tell us the tweaks they would like made to help get the asthma health message across.”

Business Manager for Asthma Waikato Vikki Blundell says the Apple platform was chosen because it’s new and an innovative way of getting the message out to kids.

“Sailor is well known in the Waikato as he has been delivered into all schools by Project Energize. Kids who see the iPad game are amazed Sailor has his own game and think it is very cool.”

The app can be downloaded here.