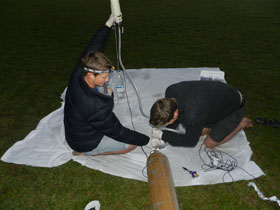 Preparing for takeoff: Zac and Josh Lyon work on their balloon before the launch.

University of Waikato twins Zac and Josh Lyon sent a weather balloon to the edge of space this year, all for a bit of fun.

The third-year earth sciences students launched their balloon on 27 April from the Waikato University field, with two cameras on board capturing amazing pictures of the North Island as the balloon ascended.

The balloon reached 31,882 metres before bursting and falling back to earth, coming to rest on a farm at the foot of the Kaimai Ranges.

“We were inspired by a father and son team from the USA who had done the same with an iPhone,” said Zac.

Another New Zealand team had previously sent a balloon to 15,000m, but the Lyon twins planned on doing better, and on a shoe-string budget. 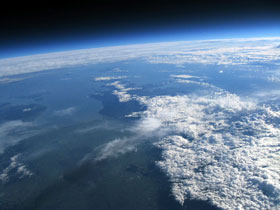 View from space: The twins' balloon reached 31,882 metres and captured stunning photographs of the North Island.

“That was our main motivation, to do something that no-one in New Zealand had done. We wanted to send it up to space and do it on a budget that students could do.”

They got the basic design from America, but did a number of things their own way.

The twins imported the balloon, parachute and pressure sensor from America, and built a polystyrene chilly bin to house the two digital cameras. Rather ingeniously they used possum-fur socks and heat packs to protect the cameras and ensure they kept running in the -34 degree temperature.

They tracked the balloon via an on board GPS device.

“It’s good that we got summer work and that there’s two of us because we split the cost, but it wouldn’t have been possible without sponsorship from TrackIt and Supergas Hamilton.”

Despite a plague of problems hitting the brothers prior to the launch, they were determined to see it through.

“The night before the launch the electronics decided to pack it in and at the launch our helium gas regulator stopped working. On top of that we lost track of the balloon for an hour of the flight and got a call from Air Traffic Control saying our balloon was potentially in the path of a plane.”

With the balloon trip successful, plans are afoot for another adventure, but so far the twins are staying tight lipped on the details.

“Josh and I live by the idea that we’re two ordinary guys doing things that are not so ordinary.”