Waikato student’s software picked up by Google and NASA 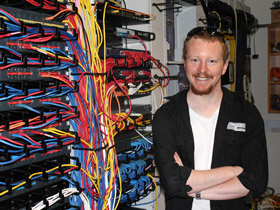 Software written by a University of Waikato computer science student has found its way to Google and NASA and is being used at the Johnson Space Center.

After catching the eye of Google earlier this year, the program is now being used around the world.

While the Waikato display wall is relatively small, ClusterGL can scale to let you have a display wall made from a handful to hundreds of monitors.

“I was talking to Google about another project I was working on and happened to mention ClusterGL. They have these curved display walls and thought ‘this will be brilliant for what we want’.”

Google offered Hunkin a Summer of Code internship where they paid him to further develop the software for their own curved display walls.

“ClusterGL was designed to work on a flat wall like the one we have at the university. Google’s involvement was to make ClusterGL better and work on a curved geometry.”

After releasing the software to the public, NASA saw the program and are now using it in the Johnson Space Center.

“NASA saw one of Google’s curved display walls and bought one of them. I was pretty surprised to hear they were using it considering it started out as something that I put together on a rainy Sunday afternoon,” says Hunkin.

Bid Bot, another program created by Hunkin which drew global media attention last year, works by scouring TradeMe every evening looking to bid on and buy newly-listed items for $1. After scouring TradeMe, Bid Bot picks the rarest item and after a successful auction, tweets what it has bought.