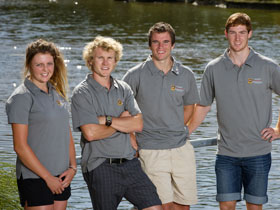 Four University of Waikato Sir Edmund Hillary Scholars have been named in the New Zealand Under 23 Rowing Squad.

Returning scholars Finian Scott, Giacomo Thomas, Shaun Kirkham and new Hillary scholar Georgia Perry have been named in the squad to compete at the U23 World Champs in Lithuania this July.

Finian Scott is looking forward to heading overseas with his Hebberley Shield and Great Race-winning team-mates Giacomo and Shaun.

“This is a massive year for New Zealand rowers. We have the biggest ever team heading to the London Olympics, which provides a new kick of adrenaline and motivation for everyone else to charge on for the next Olympic cycle,” says Finian.

“The key competition for us is the U23 World Champs in Lithuania – an event which we’ll be training hard for and focusing on as the mornings get darker and colder and the winter months kick in.”

All the rowers spent around 12-15 hours a week with on-the-water training as well as having midday weights sessions leading up to competitions.

For new Hillary Scholar Georgia Perry, 18, the jump from juniors to the U23 squad is an opportunity to establish herself as a stalwart in the U23 rowing squad.

“I’m stoked to have made the jump straight from juniors to U23s – it’s not very common and I know that making the team at a young age will help me in the long run.”

Sir Edmund Hillary Scholarships are the University of Waikato’s most prestigious scholarships and are awarded to students who are high academic achievers and are also achieving in the arts or sport. Scholars have their course fees covered, receive specialist coaching and mentoring and take part in personal development and leadership programmes.