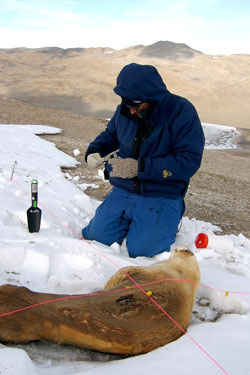 Beneath the Carcass: Waikato University's Professor Craig Cary looks under a seal carcass for biological changes.

The scientists, led by Professor Craig Cary at the University of Waikato, have been studying ecosystems in the region for many years and have found that microbial communities in the soil undergo rapid and lasting changes in response to contemporary environmental conditions.

The results of their investigation have been published this week in Nature Communications, an international online science journal.

“We used to think that changes in microbial change took place slowly over centuries,” says Professor Cary, “but the research we’ve been doing indicates that the bacteria living in the soil are inherently sensitive to climate variability - minor temperature variations could lead to cascading changes in hydrology and biogeochemical cycling and could dramatically affect ecosystem function.”

Professor Cary says a recent climate change report for Antarctica predicts the continent may experience more changes as the ozone hole begins to close over the next 50 years. “It’s important we keep documenting the current biodiversity in Antarctica so we can better predict the effects of climate change.”

The research was supported through grants from the New Zealand Foundation for Research Science and Technology, Antarctica New Zealand and the National Science Foundation. The scientists measured the rate at which observed biological changes occurred beneath a seal carcass and at a nearby control site. They found that under the carcass the soil environment changed by stabilising temperatures, elevating relative humidity and reducing ultraviolet exposure. They then had to find out how quickly these changes occurred.

To do this they transferred a 250-year-old carcass to an untouched site and used community DNA fingerprinting and new sequencing techniques to track the changes in microbial composition and structure. It took only two years for major changes to occur during the five year study.

Professor Cary says Polar systems are particularly susceptible to climate change and this study will provide a foundation for future observations on the fate of life in these extreme environments.