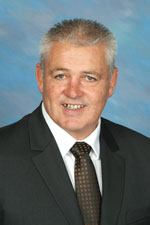 Warren Gatland: The Welsh rugby coach will receive a Distinguished Alumni Award from the University of Waikato.

Welsh rugby coach Warren Gatland will receive a Distinguished Alumni Award from the University of Waikato next week.

Mr Gatland completed his teacher training at Waikato in 1986, the same year he was first selected to play for Waikato. While full-time teaching, he played a record 140 games at hooker for the province and led Waikato to wins over Wales, the British Lions, Argentina, Samoa and Australia. He was also in the 1993 winning team that lifted the Ranfurly Shield from Auckland.

As an All Black he toured Australia, Canada, Wales and Ireland, France and Argentina.

Once his playing days were over, Mr Gatland took up coaching and says his teaching experience prepared him well for running rugby teams. He’s been Ireland’s national coach, director of coaching at London Wasps, coached Waikato in the early 2000s, and was technical advisor for the Chiefs in 2006 before Wales offered him their top job.

University of Waikato Vice-Chancellor Professor Roy Crawford says during last year’s Rugby World Cup, it was clear how much Waikato people appreciated Wales making Hamilton their base. “That the team was so accessible and amiable ensured they received strong support throughout the tournament. Warren had prepared the team for what to expect on and off the field and we were thrilled to see them do so well. I feel privileged to be presenting him with a University Distinguished Alumni Award.”

Warren Gatland’s contract with Wales has been renewed until 2015 making him Wales’ longest serving national coach, and it also means, if all goes according to plan, he will take Wales to another Rugby World Cup. He has also been appointed British and Irish Lions coach for next year’s trip to Australia.

The University of Waikato’s Distinguished Alumni Awards for 2012 will be presented on August 24 at the Gallagher Academy of Performing Arts. The two other recipients are economist and inaugural chair of the Government’s Productivity Commission Murray Sherwin and community leader and social activist Karen Morrison-Hume. All three recipients will be presented with a limited edition cast-glass figure created exclusively for the award.

Meanwhile, Warren Gatland will be giving a free public talk on Wednesday 22 August 6-7pm at the Gallagher Academy of Performing Arts – the fourth lecture in the University of Waikato Winter Lecture Series.