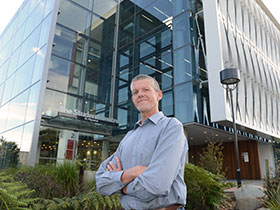 Hamilton firm Glenview Electrical Services has taken out one of the big prizes at this year’s Electrical Contractors Association of New Zealand (ECANZ) awards.

The EECA award recognises the company’s outstanding electrical work in its $2.2 million project rewiring the University of Waikato’s Student Centre, an existing building that houses the Library and Student Services. The Centre is a support hub for students and was designed and rebuilt to be environmentally sustainable – light, modern and low on energy use. Work on the Centre was completed in 2012.

Glenview Electrical Services Director Warren Griffin says that even though he was a finalist, it was still a surprise to win the EECA award.

“I was blown-away,” says Warren. “We’d never done anything on this scale before so it was a learning curve for all of us. I’m so proud of the work we did, and especially proud of winning.”

University Student Centre Project Manager Tony Dicks, who attended the awards with Warren, says it was a night to remember.

“We’re equally proud of the fact Glenview’s excellent workmanship was honoured in this way. It is even more special that it was a local firm that achieved this award.”

Now based in Frankton, Warren started Glenview Electrical 23 years ago. From small beginnings, the company has grown to become one of the largest electrical firms in Hamilton, employing a staff of between 15-18 people. In 2010, Glenview Electrical won the ECANZ Philips Lighting Award for projects that produce outstanding lighting for work it carried out at Anglesea Medical Centre.

Challenges of the University project

Warren says one of the biggest challenges of the University project was that his suppliers had never had to provide components such as carbon-neutral cabling before.

“At the time, this sort of thing was all really new. It was available in Europe, but not in Australia or New Zealand.”

Another challenge was working on an existing building while it was still in use, moving staff and the entire library collection of books several times as work was carried out.

The Student Centre has achieved Five Green Star status, and was one of the first educational buildings in New Zealand to win this recognition from the New Zealand Green Building Council. The rating recognises the environmental and sustainable features of the Student Centre design.