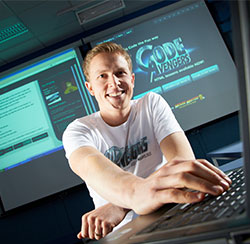 “I want to be an innovator,” Sidney told his local Press-Enterprise newspaper. “I want to do something unique, something they haven’t done yet.”

Sidney took a first step towards reaching his goal by attending a New Zealand-organised Code Avengers Code Camp on the 9th and 10th July at North Ridge Elementary School in Fair Oaks, California.

He was one of 33 students, ranging from fourth (9 yr) to ninth (13 yr) graders, who learned basic skills of web programming such as HTML, CSS, JavaScript coding and web design from University of Waikato PhD student Michael Walmsley using his unique codeavengers.com website.

“The coding skills help them get started to build their own websites, mobile apps, games and other web projects,” he says.

“They’re not going to become expert programmers in a two-day code camp, but we want them to experience IT things so they get enthused and say, ‘Hey! I really love creating websites’ or, ‘Hey! Making games, that’s really fun for me'."

He says the camp also enables kids to meet friends with similar interests.

“Potentially, when one of these kids goes to create the next Facebook, they know who to contact to be their next partner.”

Walmsley, from Hamilton, met North Ridge fifth-grade teacher David Coopersmith through a mutual friend and asked if he wanted to host a Code Avengers Code Camp while Walmsley was in the US, attending a Computer Science teacher conference in Boston.

“On the first day I put my 8 to 11 year-old absolute beginner programmers on codeavengers.com and they took off and never looked back,” he says.

“The interactive lessons keep them engaged and they’re able to help each other when they get stuck. I’m also using Code Avengers to train fellow teachers, who will be helping me teach web development next year.”

Walmsley says the website gives students a great start and provides teacher with tools to assess and encourage students.

The goal of Code Avengers

Currently only 1 in 10 American schools teach students how to code, meaning a million of the best jobs in America are not available to many of the 3.6 million high school students that graduate each year.

“Our goal is to be the number one site for the total beginner. Code Avengers is now used by over 600 schools and growing, in more than 30 countries around the world. University business schools are also catching on, with the University of Auckland purchasing a site licence to teach the basics of web development and JavaScript programming to their 2500 first year business students.”

Walmsley, an online language learning expert, leads the development team and says they are committed to increasing the breadth of online lessons to include other popular coding languages, such as Python and C++.

“We want to make learning to code fun and effective for all ages,” he says.

Summer Code Avengers code camps are being planned in New Zealand to support the rolling out of the new NCEA digital technology standards in web development and programming for secondary school students. For more information on dates for New Zealand code camps, visit www.codeavengers.com.