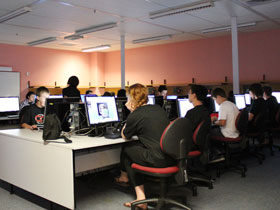 Code Camp: About 48 Year 9 and 10 students have been learning computer programming basics at Code Camp.

Today is the final day of Code Camp, held at the University of Waikato.

It’s being run by Computer Science PhD student Michael Walmsley and aims to make learning computer code more attractive for students interested in constructing games and apps, and to revolutionise the way computer science is taught in schools.

Fundamentals of programming and web development

About 48 Year 9 and 10 students signed up for the three day camp, and have been learning programming basics like HTML, CSS, and Java Script.

A future in computer science

Cousins Troy and Hohua Hemi, both from Hamilton Boys’ High School, attended the camp and say they see themselves getting involved in the computer science industry in the future.

“Code Camp has been going really well,” says Michael. “Throughout the three days the students have been learning three computer languages and today they’re doing an exercise where they will create a chatterbot – a program that you can ask questions and it will talk back to you.”

“With Code Camp, what they would usually learn throughout a term at school, they’re learning over a couple of hours and then putting it into practice.”

Plans are afoot for a second Code Camp in Easter, running from 22 – 24 April.