Dog training 101: Get the timing right 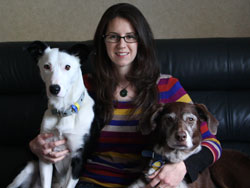 Puppy love: Clare Browne with her dogs Flint and Apple.

A love for dogs and their welfare prompted Waikato University student Clare Browne to focus on investigating dog training for her PhD - specifically the timing of giving rewards.

"Surprisingly, although there is quite a lot of research available on the timing of giving rewards and delayed reinforcement for rats, pigeons and other animals, no one has looked at this in dogs," says Browne.

She says that perhaps the reason for the lack of research in this area could be attributed to the difficulty of designing an experiment for a dog that controls for the many outside factors.

"For example, if we give a command to a dog and don't reward them immediately, they may pick up on the smallest of cues from us, such as reaching towards our pockets or a slight posture change."

Before deciding on the focus of her thesis, Browne reviewed popular dog training literature and found that the five best-selling books were riddled with inconsistent messages and dog training methods.

Browne then decided to see if this observation would extend to real life so she filmed training at three local dog training clubs and measured the delays between dogs' behaviours and reward.

"Immediately what I noticed was that people were inconsistent in their timing of giving their dogs a reward; some were giving it straight away, others were waiting for up to five seconds or more."

Browne chose to complete her PhD at Waikato after matching up her interests with her chief supervisor Dr Nicola Starkey from the Learning, Behaviour and Welfare Research Unit.

"I liked what Waikato had to offer within the arena aimed at advancing the understanding of human and animal behaviour," says Browne.

She began designing her experiments asking for volunteers, with a variety of dog breeds. Her most recent experiment found that a delay of just one second can affect the behaviour of some dogs. "It sounds like a really short time, but if you think about how fast they can move, a few seconds is a long time from a dog's perspective."

Alongside her PhD, Browne has teamed up with the Hamilton City Council Animal Education and Control and an associate of the Hamilton SPCA to offer dog behaviour and training seminars free to the public.

"We had been running the seminars through the University for a couple of years and got great feedback. This year we approached Animates and they offered to provide a venue for the seminars which was a huge help. We just wanted to offer some advice to dog owners on basic dog behaviour, such as how to identify if your dog is stressed out, how to avoid common behaviour problems and that sort of thing."

Dog training 101: Get the timing right is licensed under a Creative Commons Attribution 4.0 International License.