Gamers to get creative at the University of Waikato 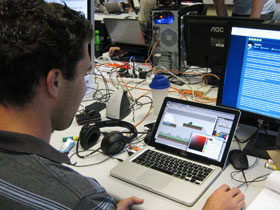 Game Jam: This weekend the University of Waikato hosts a leg of the Global Game Jam.

This weekend the University of Waikato will once again host a leg of the 48 hour Global Game Jam.

Game Jam brings computer enthusiasts together to create video and board games. It encourages experimentation and innovation - participants come together for 48 hours, form teams, and develop games around a theme that is announced at the start of the event.

Last year the Global Game Jam was held at 242 locations in 47 countries, and created over 2000 games in one weekend.

“Game Jam was one of the reasons I decided to study at the University of Waikato. Time and time again I meet people with interests in graphic design or computer science who come to Waikato because of Game Jam.

“It’s a great event and brings together a whole bunch of really creative people, and you get some really cool, quirky games coming out of it.”

The major roles in game development are programming, artwork and animation production, but people can also plan, contribute music, work on storylines and test the games. Participants range from senior high school students to IT professionals and independent developers.

All finished games will be archived onto the Global Game Jam website for all to play.