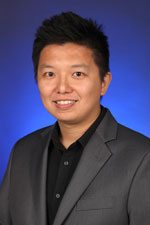 University of Waikato senior lecturer Ryan Ko is one of six people worldwide to receive the Ron Knode Service Award 2012 for his volunteer efforts with the not-for-profit Cloud Security Alliance (CSA), which promotes best practices for providing security assurances within cloud computing.

Dr Ko, from the Faculty of Computing and Mathematical Sciences, is an acknowledged expert in cloud computing security and along with receiving the award has also been appointed to the CSA Asia Pacific leadership team as research adviser.

The award is named in honour of innovative thinker Ron Knode, who died last year. He was a key member of the CSA and a noted information security expert.

Dr Ko says the award was tinged with sadness as he had met Knode not long before his death and been hugely impressed by him.

Dr Ko has been involved in cloud computing from the earliest days, working for HP's Cloud and Security Lab from 2010 to 2012 and volunteered as a research director for the Singapore chapter of the CSA and founder of the CSA Cloud Data Governance Working Group.

He says cloud security began to become an issue in early 2010 and the burgeoning use of cloud computing has raised more issues around the security of data stored in a cloud environment.

There are also serious considerations around the increasing use of virtual servers, where organisations buy virtual computing power when they need it, rather than invest in expensive hardware themselves.

The actual computers can be anywhere in the world and handle information from different companies at different times.

"A lot of corporations and companies use the same machines so that raises issues," he says.

"There are lots of problems with multi tenancy, problems of cyber security levels, tracking data in the cloud."

He has also been concerned about the provenance of data stored in a cloud environment.

"What happens to your data, who copies it, who has access to it?"

While most of the discussion around cloud computing has been in the area of data storage, Dr Ko says accessing computer power is just as important.

"You can buy computer power cheaply," he says.

"If you secure it, where does it go and what happens to it? There's a growing need for governance around the lifecycle of data stored in the cloud."

Dr Ko moved to the University of Waikato to tackle cloud security issues from a user viewpoint, rather than a commercial one and says they have differing needs for cloud security.

"Users don't care which server you use but they do care about privacy and control of their data. Industry has other obligations and regulations so they may have to keep data auditable," he says.

"For some time I'd looked for a place where I could do user-centric research. It's hard in the commercial environment so university is ideal."