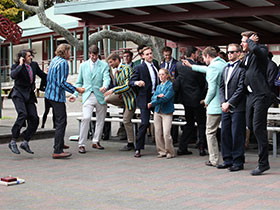 Crews competing in Sunday’s Gallagher Great Race came together this morning for a powhiri at the University of Waikato.

Men’s rowing crews from Cambridge (UK) and Sydney universities and women’s crews from Sydney and Melbourne were greeted in the traditional ceremony at Te Kohinga Mārama, the University marae, just before the rain set in.

Sydney University are defending men’s champions and their captain reminded Waikato crews of the fact during the speeches. There were warnings from Waikato speakers to be wary of taniwhas in the river.

Waikato women are defending the Bryan Gould Cup in Sunday’s race which sees crews racing upstream on the Waikato River for nearly four kilometres to finish at Ferrybank in Granthan Street in the Hamilton.

University Vice-Chancellor Professor Roy Crawford welcomed the visiting crews warmly, but also told them they weren’t going to win. He also mentioned that Waikato had rowers fresh back from the World Champs in South Korea, and outlined how the Waikato region was becoming a centre for high performance sport.

Captains from all the crews spoke, and then crews were required to sing - much to the crowd’s amusement. They were treated to original renditions of Eiffel 65’s I’m Blue (Cambridge), Dock of the Bay (Waikato), Total Eclipse of the Heart (Sydney) and finally the Melbourne women who did the cups song, When I’m gone.

Rowing begins at 9.00am on Sunday with secondary schools and corporate races preceding the main events at 12.25pm for the women and 1.25pm for the men.