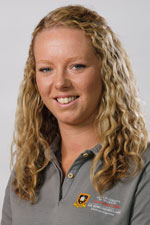 She retained the title after putting in a dominant display at the recent New Zealand Young Rider and Pony Championships held at Manfeild Park in Feilding on 12-13 January.

Aboard her steady equine partner, the 12-year old New Zealand bred Amajah, Kate won both championship rounds. This is her third New Zealand Young Riders' title in a row.

"I had an awesome weekend away at the Young Rider Championships," said Kate. "I took away three trophies. The New Zealand Young Rider champion, Captain of the winning North Island team and highest points at the competition."

Kate first started riding when she was five years old and at 16 began competing at a national level in dressage.

She is currently studying towards a Bachelor of Teaching and is in her third year of being a Hillary scholar.

Sir Edmund Hillary Scholarships are the most prestigious scholarship offered by the University of Waikato.

They are awarded to high academic achievers who are also achieving in the arts or sport. Scholars have their course fees covered, receive specialist coaching and mentoring and take part in personal development and leadership programmes.