INTERCOAST PhD research to continue in the Bay 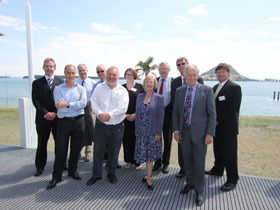 A second round of doctoral research projects will soon be underway in the Bay of Plenty as part of the international INTERCOAST programme involving the Universities of Waikato and Bremen in Germany.

Intercoast is a multidisciplinary collaboration between the two universities bringing doctoral students to New Zealand to study the marine systems of the Bay of Plenty and better understand the significant changes taking place in our coastal environment. Waikato students conduct similar research around the North Sea in Germany.

In Tauranga yesterday, the University of Waikato’s Environmental Research Institute hosted the opening session of a two-week visit by University of Bremen delegates. The session was also attended by the German Ambassador Dr Anne-Marie Schleich and senior representatives from both the New Zealand and German Governments.

Second round of doctoral projects

Workshops being held over the next two weeks will update plans for the second round of doctoral projects soon to begin, as well as developing funding proposals for the third round through to 2018.

Ambassador Schleich said New Zealand and Germany had collaborated in science research for 35 years and Intercoast, which was established in 2010, was the flagship science programme between the two countries. She also acknowledged the support of Waikato University’s key partners in the Bay of Plenty – Bay of Plenty Regional Council, Priority One and the Port of Tauranga.

Waikato’s Chair in Coastal Science Professor Chris Battershill said Intercoast was a successful example of international science collaboration and the relationship had also been enormously helpful during the long-term environmental monitoring programme in the wake of the Rena grounding.

“Our collaboration with the University of Bremen allowed us to quickly harness the most sophisticated expertise and technology globally, for surveying the seabed for contaminants and debris. It was therefore possible to cover very large expanses of the Bay of Plenty near-shore coast that was influenced by Rena,” Professor Battershill said.

Intercoast involves natural science, social science and law doctoral students. Projects include looking at the impacts of harbour development on ecosystems, protection and utilisation of the harbour and coastline, sediment studies as well as the legal issues surrounding coastal and marine resources, and the social changes taking place in coastal communities. Marine systems in both hemispheres face similar pressures from rapid population increase, commercial development and recreational usage. The projects aim to provide long-term data modelling and impact analysis to aid decision making by regional and environmental planners.

The first Intercoast student graduated from the University of Bremen in December. Several more students are almost complete. Waikato students began later than their Bremen counterparts and are mostly halfway through their research. Twelve new Bremen students have just begun their research and expect to visit the Bay of Plenty for the New Zealand part of their research next year.

INTERCOAST PhD research to continue in the Bay is licensed under a Creative Commons Attribution 4.0 International License.