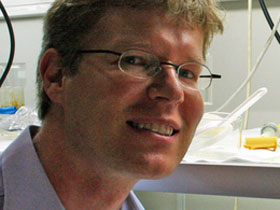 Exploring seaweed: Professor Kai Bischof from Bremen’s department of Marine Botany and is part of a large delegation to visit Tauranga and Hamilton, exploring how seaweeds along New Zealand’s coastline are coping with habitat changes.

How seaweeds along New Zealand’s coastline are coping with habitat changes will be explored in a free public lecture this month by a visiting scientist from the University of Bremen in Germany.

Professor Kai Bischof heads Bremen’s department of Marine Botany and is part of a large delegation from the University to visit Tauranga and Hamilton for meetings with the University of Waikato’s Faculty of Science and Engineering.

The function of seaweeds in coastal ecosystems

Entitled In a submersed garden: Seaweeds or just weeds?, Prof Bischof will discuss the multiple and vital ecological functions performed by seaweeds in coastal ecosystems while showing how some species, such as sea lettuce, may become a nuisance once released from their controlling factors.

The presentation will look in particular at the biology and ecology of the giant kelp (Marcocystis pyrifera), which forms dense underwater forests also along the New Zealand coastline, and its associated communities. He will also address the question of whether seaweeds are to be considered winners or losers of global climate change.

The Universities of Waikato and Bremen jointly operate the multidisciplinary INTERCOAST programme, which was set up in 2010 to bring international PhD students to New Zealand to focus on marine research in the Bay of Plenty. Similar research is conducted around the North Sea in Germany, where Waikato doctoral students travel to further their own research.

Professor Bischof’s research focuses on the ecophysiology of marine macrophytes (seaweeds and seagrass) in a changing environment. His work is contributing to broadscale research underway to predict the future development of coastal ecosystems under global and regional environmental change.

The free lecture will be held from 5.30-6.30pm on Monday 18 February at the Tauranga Yacht and Power Boat Club, 90 Keith Allen Drive, Sulphur Point. For more information please call Rowan Marsh on 578 5927.