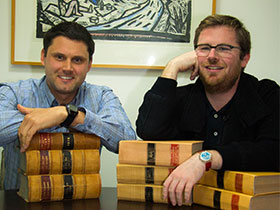 Two ‘mature’ University of Waikato law students are heading to the United States as New Zealand’s representatives at an international negotiation competition.

Despite Rob now working in Auckland for the Health and Disability Commissioner, and Darren working in Tauranga as a police officer in Youth Services, they ‘ve been getting together recently to fine-tune their negotiation skills before they head away at the end of the month.

The pair, in their early 30s, met when they were students in Tauranga in the early days of their law study and remained friends while completing their third and fourth years at Waikato’s Hamilton campus.

For Waikato students, Dispute Resolution is a compulsory third-year paper which includes a negotiation competition, and the pair found they negotiated well together.

“Perhaps because we have a bit of life experience,” says Darren. “We’d both had experience working with legal practitioners, which is an advantage when negotiating in a competition. We can read each other pretty well now – almost know what the other is thinking, what direction they’re going to take.”

A case between an airline and a wine company

The team already has its first ‘case’ to negotiate in America. “It’s between an airline and a wine company – and we’re representing the wine company,” says Rob. “We’ve been developing some different options because you have to be prepared for anything the opposition throws at you.”

“Each competition you take part in, each one you watch, you learn something,” says Darren. “So we’re upskilling all the time.” They’ve had Judge Peter Spiller critiquing their efforts and from the Faculty of law Director of Clinical Legal Education & Competitions Cheryl Green has been giving guidance.

"I’ve worked with Rob and Darren for over a year now and they are a very polished and talented negotiation team. One of the most important things about negotiation is being able to handle all sorts of different situations and reactions from the other side and, as a pair, they do this intuitively,” says Ms Green.

The team has received good support from the New Zealand Law Foundation, which provided a grant for the students’ tickets and accommodation. “The Foundation’s support has been instrumental in getting us to Los Angeles,” says Rob. “The Faculty of Law and Dean Professor Morse in particular, have also been hugely supportive.”

The competition in Orange California takes place in early July.