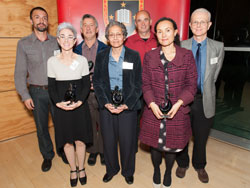 The University of Waikato has acknowledged some of its excellent researchers, presenting awards in six categories at its inaugural Research Excellence Awards.

The winners were genuinely surprised – none knew they were winning until their name was announced on the night.

Dr Tahu Kukutai won the Early Career research award for her work in the field of Māori and Indigenous population research. Dr Kukutai, based in the National Institute Demographic and Economic Analysis, works on several international collaborations and currently leads a Marsden project investigating how governments around the world classify their populations by ethnicity. Since 2010 she has been awarded 11 externally funded grants.

A researcher heavily involved in researching gender, sex and sexuality won the Community Impact award. Professor Lynda Johnston has spent more than 20 years informing debate and shaping community opinions in issues such as marriage equality, queer identity and sexual health and wellbeing. She was a co-founder of Hamilton Pride Incorporated and continues to co-chair it today.

The award for Commercial research went to Senior Lecturer from Science and Engineering Dr Johan Verbeek. In his ten years at Waikato, he has established a research career linked with industry in the field of biopolymers, converting industry co-products and transforming them into useful and non-polluting plastics.

Dr Te Taka Keegan has spent more than 20 years assisting the revitalisation of Māori Language. He is based in the Faculty of Computing and Mathematical Science and was the winner of the Maori/Indigenous Excellence Award. Dr Keegan worked with Microsoft to build a soft keyboard to enable use of the macron; he’s supervised a student implementing a macroniser to automatically insert macrons into typed text. He has worked as a project manager on the localization of Microsoft’s Windows and Office products into Māori, and with Google to manage the implementation of the Māori search facility.

The Waikato Cortical Modelling Group is the Winner of the University of Waikato Research Team Research Excellence Awards. This small and highly productive group is Professor Moira Steyn-Ross, Associate Professor Alistair Steyn-Ross and Dr Marcus Wilson, plus a team of seven PhD and MSc graduate students. They collaborate intensively with the Waikato Clinical School.

For 15 years, this group has been working in neuroscience to develop a sound, physiologically-based mathematical model of the brain that explains many of the clinically observed features associated with general anaesthesia, sleep, cognition and seizure.

Computer Scientist Professor Ian Witten was presented with the Lifetime Research Achievement Excellence Award. Professor Witten has helped establish the University of Waikato as a leader in data mining and digital libraries. He’s the only current member of the University listed in Thomson Reuters Highly Cited researchers.

Ian is well known too for his open source software, sharing his advances with thousands and thousands of students, teachers and users around the world. These include Weka, a data mining tool, Greenstone, a digital library platform and the language learning FLAX. Weka is probably the world’s most widely-used machine learning workbench. During his time at Waikato, Ian has attracted funding of approximately $7 million, including five Marsden fund grants.