Science internships give street-credibility in a competitive job market 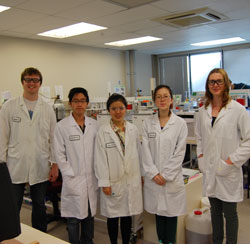 Spending your summer holidays testing mycotoxin levels and reorganising filter samples may not sound like most people’s idea of fun, but for five university science students the chance to work in a commercial analytical laboratory in Hamilton over the summer is the career break they’ve been dreaming of.

Hill Laboratories, New Zealand's largest independent laboratory, is a strong advocate of the Government’s drive to support future scientists. In 2012, in partnership with the Ministry of Business, Innovation and Employment (formerly the Ministry of Science and Innovation), the laboratory offered five undergraduate science students paid summer internships.

From humble beginnings in the early 1980s testing soils, plants and waters, Hill Labs is currently the largest independent analytical laboratory in New Zealand with environmental, agricultural and food divisions.

Hill Laboratories is a private, New Zealand owned company with more than 300 employees. It operates six laboratories from three locations in New Zealand, with a sales branch in Japan, and an agency in China.

Marketing manager Martin Brock said Hill Labs was overwhelmed by the response it received from students wanting the internships.

“We processed 65 applications from across the country, including Dunedin, Wellington and Christchurch. In the end though we could only give five internships, and based on the calibre of their applications we chose two students from the University of Waikato, two from Auckland University and one from AUT.”

The five interns are being paid to work at the laboratory to gain commercial experience and the opportunity to apply their university learning. They also have to undertake a project for Hill Laboratories which it has to report back to the Ministry as part of the programme.

Intern Jason Kirkham is studying for a Bachelor of Science at Waikato University. From Nelson, Jason was originally studying at Canterbury but moved to Hamilton last year after finding the impact of the earthquake was affecting his studies through reduced contact time with his tutors and classes being cancelled for building checks.

“Learning science can be difficult. Everyone has their strong and weak points, but it’s the applicability that’s exciting and once you understand the science and start applying it – that’s when things get really interesting.”

Jason is working at Hill Labs’ Clyde Street laboratory in the Environmental division. His project is the optimisation of sample filtration for nutrient analysis. Essentially, under the guidance of his supervisor, he is helping the lab look at its process for testing water samples and finding ways to improve it, particularly the filtration aspect of the test, where the water is filtered before it is tested to ensure it doesn’t block the testing instruments, which are extremely sensitive to foreign bodies.

Hill Laboratories processes hundreds of thousands of water samples every year for large and small clients including farmers, councils and consultants.

“To improve water filtration, we’re looking at everything from the minute the sample is received to the time it is processed by the instrument. From the psychology behind the process to the physical process itself, everything is being evaluated to see what is working, what’s not and where it can be improved without jeopardizing quality,” said Jason.

He said the internship would strengthen his CV, and he hoped give him an edge in the marketplace by making him stand out from the crowd when it came time to get a full-time job.

“It’s a very competitive student environment and there are only so many jobs out there. This internship has helped me get real experience, make valuable contacts and have a great reference in my CV. I feel very lucky to have been given this opportunity.”

Lisa Brown from Te Aroha has finished her Bachelor of Science at the University of Waikato and sought out the internship at Hill Labs after hearing from friends in the industry they were a good company to work for.

She is currently seven weeks through a 10 week internship, and her project involves validating and updating one of the methods used for inorganic water testing.

“Science has always been something that I’ve been interested in,” says Lisa. “What I’ve learnt during my time here will definitely help me when it comes to looking for jobs.”

She currently has travel plans but says the experience would strengthen her CV, and help her standout from the crowd when the time comes to look for work.

Founder and managing director of Hill Laboratories Dr Roger Hill said in the last 20 years the number of students studying pure science had declined as other career and training opportunities had emerged, resulting in a drive by the Government to revive the science and innovation sector.

Last year Dr Hill received an Honorary Doctorate from the University of Waikato for his service to science in the region.

His close ties with the University of Waikato over the past 30 years have led to a string of sponsored projects at MSc and PhD level, and Dr Hill has also directly sponsored University of Waikato activities targeting secondary school students, including the annual Rotary Science Summer School, the Analytical Chemistry Competition and ChemQuest.

In addition, Dr Hill has long-standing links with the Department of Computer Science, where his drive, enthusiasm and backing has been a key factor in the success of a collaboration to develop leading-edge software for data mining applications.

A win-win for everyone

“These internships are a win-win for everyone involved,” says Dr Hill. “They introduce students to the scientific community so that they can better understand where their aspirations lie, whether that is in the analytical or research environment and it helps them direct their career focus.”

While he said there were no guarantees any of the students would secure full-time employment beyond the internships, he said it wasn’t completely out of the question and that Hill Labs had in the past continued to employ interns during holidays or for project-specific work.

“Interns are certainly one of our first choices for future employees because we’ve had the opportunity to see them in action, understand their strengths and get to know them first before we hire. Any employer knows how valuable that opportunity is and that sometimes you’ll find your future star performers.”