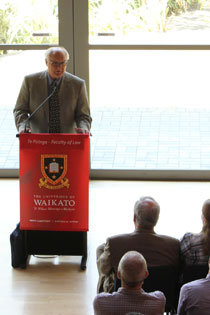 The Honourable Sir Grant Hammond, President of the New Zealand Law Commission, spoke at the University of Waikato today at the inaugural Krinock Lecture – hosted by Cooley Law School in the USA.

His lecture, Law Making in New Zealand and the USA, focused on the difficulties faced when making new laws.

He spoke about the need for law to take into account a wide range of ethical issues and moral values, citing examples from his vast career, in practice, as an academic, on the bench and now as a professional law reformer, advising the New Zealand Parliament. In 2011 Sir Grant was knighted for services to law.

The Krinock Lecture was established by the faculty conference of Cooley Law School to honour their late colleague and former dean, Bob Krinock and staff and students from Cooley are currently in Hamilton, taking law papers at Waikato as part of their Annual ‘Down under’ Study Abroad Programme.