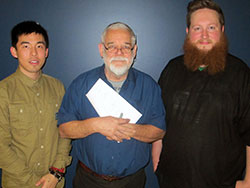 Students from the Conservatorium of Music at Waikato University last week had the chance to showcase their latest and best compositions at the Lilburn Trust Student Composition Awards concert.

The awards were split into the categories of ‘Acoustic’ and ‘Electroacoustic’. First Place in the acoustic section went to international Bachelor of Music (honours) student Xu Tang, for his piece for solo cello called Remembering Beijing.

Merits were awarded to Cecily Shaw for her piece for ukulele and voice called Shade, and Andrew Leathwick for his song The Pallid Wreath, for soprano and piano.

A merit award in the electroacoustic section went to Anna Tashkoff for Revolutions: The Self composed for computer and iPad interface.

Cellist Yotam Levy received the performance prize for his playing in Push for Miles and Remembering Beijing as well as in works by Josiah Abbott and Alex Geary.

Adjudicator for the awards was Dr William Dart, ex-Senior Lecturer in Music at the University of Waikato. Dr Dart is regarded as one of New Zealand’s leading music critics, and is currently the classical music critic for the NZ Herald and is a radio broadcaster at Radio New Zealand Concert. He was impressed by the variety and high standard of compositions and performances.

Convenor of the Music programme at Waikato, Associate Professor Martin Lodge, says that the awards are possible thanks to the continuing generosity of the Lilburn Trust established by the great New Zealand composer Douglas Lilburn (1915-2001).

“Each year we receive a grant from the Trust to run the awards to support and encourage promising student composers. We are extremely grateful for this ongoing support.”

This year the first placed students received $750 each, students that were awarded merits received $250 each and the performance prize was $250.

On top of this, every student who had a piece shortlisted, but didn’t win, received a performance royalty of $50 each for having their piece played in the Awards concert.