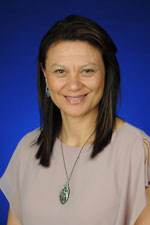 Mrs Te Aho, of Ngāti Koroki Kahukura and Waikato Tainui descent, will be one of many staff members competing in the biennial competition which is expected to see more than 40 kapa haka teams compete.

Performing at an early age

"I've been involved in kapa haka since I was a child performing mainly here in the Waikato. More recently I have joined a well-known group on the East Coast called Waihirere.

"Although I have been a long-time supporter of Waihirere, I decided to join as a performing member because my husband performed in the group for many years. My children are well-versed in their culture and history here amongst my people, so this is an opportunity for them to learn about their Te Rawhiti people, their songs, their stories, their haka."

This year's Te Matatini will be her fourth with Waihirere, and she's hoping that it will be a successful one.

"Training has been by way of wānanga once a month since August last year, but since Christmas it's been every weekend so my family travels down to Gisborne every weekend, leaving on Friday and coming back on Sunday night - it's pretty full on.

"There is a lot of sacrifice involved but it's the love of singing and performing, and being on stage that keeps you motivated. You become close friends with other performers, particularly the ones that you get to know over a long period of time."

The University of Waikato is a strategic partner with Te Matatini which takes place 20-24 February at Rotorua International Stadium. For more information visit the Te Matatini website.

View more information on the University's involvement at Te Matatini.