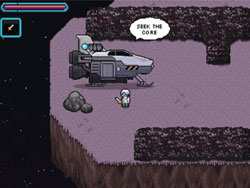 The Seeker: A game created at the Waikato leg of the Global Game Jam.

The Faculty of Computing and Mathematical Sciences at the University of Waikato hosted a leg of the 48 hour Global Game Jam this past weekend, with an adventure game called The Seeker winning site favourite.

The Seeker was created by David Neilsen, Hemi Ormsby, Thomas Bredin-Grey, and Mike Blanchett, and follows a spaceman through a series of stages as he battles foes while seeking ‘the core’.

Organised by Computer Science senior lecturer Bill Rogers and student Brian Cole, the Global Game Jam brings gaming fans together to create video and board games. It encourages experimentation and innovation - participants come together for 48 hours, form teams, and develop games around a theme that is announced at the start of the event. Game Jam: The University of Waikato once again hosted a leg of the 48 hour Global Game Jam.

“Once again it was a great weekend,” said organiser Brian Cole. “All the Game Jammers put in a huge effort to get their games finished within 48 hours and it was good to see a few familiar faces from previous years as well as all the new ones.”

“There were two single person teams that completed this year who deserve mention, Joshua Scarsbrook and Issac Gilmour each put in a herculean effort and created games entirely by themselves. All the teams worked really hard and into the wee hours of the night and the quality of the games was really high.”

Last year the Global Game Jam was held at 242 locations in 47 countries, and created over 2000 games in one weekend.

All finished games will be archived onto the Global Game Jam website for all to play.