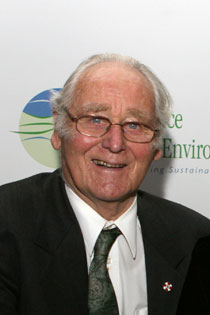 Honorary Doctorate: Gordon Stephenson is a selfless giver of his time and skills to the environment.

A man who has spent more than 50 years working on and for the land is to receive the University of Waikato's highest honour.

South Waikato farmer and environmentalist Gordon Stephenson, of Waotu, near Putaruru, will receive an Honorary Doctorate from the University of Waikato for his lengthy and on-going contribution to the environment.

Contributions to the environment

Mr Stephenson has achieved a remarkable amount in the 55 years he has been in New Zealand and he continues to work for the environment.

He established the QEII National Trust in 1977 and became the first person to covenant land under the trust. Today more than 3500 covenants have been registered covering more than 100,000 hectares.

He's been on the national body of Federated Farmers and Forest and Bird and had leading roles in organisations such as the Waikato Conservation Board, the Maungatautari Ecological Island Trust, the New Zealand Landcare Trust and the South Island High Country Review Committee.

He instigated the Farm Environment Awards, which are now held nationally with the winner receiving the Stephenson Trophy.

In 1992 Mr Stephenson and his wife Celia were jointly awarded the Loder Cup, New Zealand's most prestigious conservation award.

A selfless giver of time and skills

University of Waikato Vice-Chancellor Professor Roy Crawford says Mr Stephenson is a great example of someone who selflessly gives of his time and skills for the public good.

“He has led by example in so many areas and what he has achieved is absolutely remarkable,” Professor Crawford says.

Mr Stephenson will receive his Honorary Doctorate at the University of Waikato's graduation ceremony at Claudelands Events Centre on April 16.