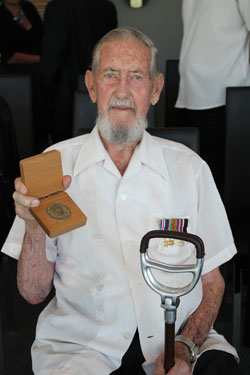 A man who left school at 12 and who has helped generations of young people make the most of their opportunities has been awarded the University of Waikato medal.

Bill Flower left school during the 1930’s Depression as his parents couldn’t afford to send him to boarding school in his native Australia.

His adventurous spirit saw him arrive in New Zealand eight years later where he worked at Ruakura before - with war looming - he enrolled at Hamilton Technical College to better his chances of being accepted into the Royal New Zealand Air Force.

He passed the entry test with flying colours.

Mr Flower went to England with the Air Force, transferred to the RAF and flew Halifax bombers during the war. While in England, he was stationed near Oxford, allowing him to study several economics papers at Oxford University.

That taught him the basic principles of how the economy works and gave him an understanding of how he could do better himself. It also fostered a lifelong interest in education.

Following the war, Mr Flower returned to New Zealand, where he married Joan. The couple bought a farm near Morrinsville – Longacres Farm - and raised four children. They also helped out numerous other young people when they could, sending several boys to Outward Bound or giving them work on the farm.

Contribution to the University

When the idea to build a university in Hamilton was first mooted, Mr Flower was among the first to volunteer for a committee set up to raise funds for the Halls of Residence.

The Flowers have funded undergraduate prizes in global and environmental economics at the University of Waikato and in 2010 launched the Flower Doctoral Fellowship in Economics, which offers $30,000 a year over three years to a postgraduate student interested in New Zealand’s agricultural future.

The inaugural recipient of the fellowship was student Alex Kravchenko, who is studying for his PhD in Economics with his research focused on freshwater management in New Zealand.

A University of Waikato Medal is given to acknowledge services of international and national credibility, outstanding leadership and community endeavour in a person who also has strong university connections.

Involved since the very beginning

“He has been involved with the University of Waikato since the very beginning and has given his support to generations of students. Mr Flower’s commitment to education is inspiring and his influence will be felt for many years to come.”

Mr Flower received his medal on January 30 at a small function held at the university. He attributed much of his philanthropic intent to the guidance and generous, warm-hearted nature of his wife.

“Behind every successful man, there is a hardworking, loyal woman,” he said. “I have been blessed with 67 years of happy marriage to a perfect wife.”