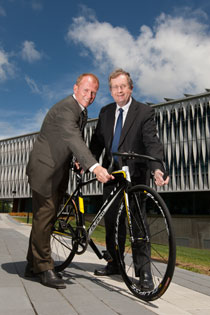 The University of Waikato says Triathlon New Zealand’s announcement it will move its base to Cambridge further enhances high performance sport in the region.

Waikato University is the Tertiary Education Partner of the Home of Cycling Charitable Trust and has tertiary naming rights for the National Cycling Centre of Excellence (Avantidrome) complex.

Vice-Chancellor Professor Roy Crawford has praised Triathlon New Zealand’s plan to move its base to Cambridge, which is already home to high performance rowing and cycling.

Professor Crawford says Triathlon New Zealand has made an excellent choice. “The University of Waikato’s partnership with Home of Cycling enhances our position as the key provider in the region in the area of high performance sport and excellence. I am sure Triathlon New Zealand will also benefit greatly from being here.”

He says the arrival of Triathlon New Zealand will be beneficial for all, including the university’s most prestigious scholarship programme, the Sir Edmund Hillary Scholarship.

“We have several triathletes represented in this sought-after scholarship programme. They too will be pleased to hear that Triathlon New Zealand is to be based here and will be able to identify talent in the triathlon space.”

Professor Crawford says the university’s investment gives significant benefits for enhancing the Waikato student experience, increasing access to research opportunities, and growing regional and national sporting links. “This has been confirmed with Triathlon New Zealand’s announcement. We look forward to welcoming them to the region.”

The Avantidrome will be located near St Peter’s School near Cambridge and will consist of a velodrome and associated space for athletes and administrators. Building work is underway and is due to be completed towards the end of this year.

Under the partnership, the University of Waikato plans to further develop teaching and research in sport science, management and related areas, and has already been identified as the preferred institution in the region to deliver professional development and postgraduate opportunities for BikeNZ and High Performance Sport New Zealand.