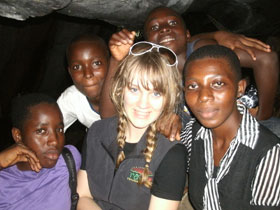 An eye opener: First year Management Student Jess Howse was fascinated by the unrestricted access to technology in such poor living conditions during her time in Ghana.

Waikato Uni students are solving the world’s problems one app at a time. Team APPortunists is one of two teams from Waikato to secure a place at the 2013 New Zealand Microsoft Imagine Cup finals by developing a vaccination/medical records smartphone app designed for third world countries.

The Microsoft Imagine Cup, the world’s largest technology competition, invites tertiary students from around the globe to create software using Microsoft applications to find real solutions to real-world problems. This year students were asked to choose from one of three categories; Innovation, World Citizenship, or Gaming.

For first year Management Students Jess Howse and Michael Watson, the choice of World Citizenship was easy. Having spent time in developing countries like Cambodia and Ghana, the pair was fascinated by the unrestricted access to technology in such poor living conditions.

“It was an eye opener, but for many different reasons,” says Jess, who is studying a Bachelor of Management Studies (BMS) with a major in Electronic-Business and Marketing. “Despite the poverty and the very obvious need, almost everyone we saw had a mobile phone. And most families would own at least one smart phone, usually the father.”

Michael, who is studying a Bachelor or Communication Studies (BCS) majoring in Management Communications and International Management, says that approximately 80 per cent of the world’s mobile devices are in developing countries. “And this number will only increase as prices drop and newer versions are released; the older phones usually end up in these places.”

Michael says the access to WiFi and mobile broadband was also surprising. “The G3 network in Cambodia was actually a lot better than New Zealand’s.”

The pair says this revelation opened up a world of opportunities to solve some of the more basic day-to-day problems using communications technology. They came up with the idea for a vaccine app straight away.

The app will keep records of vaccines for an entire family and will notify the user, or other family members via text, when they are due for a booster shot. When the user is connected to WiFi it will also notify them of any updates or new vaccines.

“Microsoft is currently developing disaster relief programmes for developing countries, and we see our apps working in with these very well,” says Michael.

The pair teamed up with Computing and Mathematical Science students Haley Littlewood and Keiran Thomson to create a working version of the app to enter the competition. They were picked as one of 100 teams to be interviewed by Microsoft via Skype, before being selected as one of only 25 finalists to make it through to the competition round in Auckland in March; one of two teams from Waikato University.

The team has also been working on a separate app idea for the developed world which keeps a person’s medical information at their fingertips. The app would sync with their doctor’s records upon visiting their local medical centre. “The app would help identify medical conditions and prescriptions for medication. It would also be useful for providing exemptions at customs when travelling overseas,” says Jess.

Jess says they are now working on a way of combining the two apps. “We were advised by Microsoft during our interview that it would be a good idea to submit just one app, so we are working on trying to pull the two together.”

The Microsoft NZ Imagine Cup will be held in Auckland from 24-25 March and includes the competition, where teams present their apps in front of a panel of judges, and a showcase event on the second day, where teams are given the opportunity to talk to investors and industry VIPs. “There is real potential for start-up ventures to occur, so that’s very exciting,” says Jess. “But whatever happens I want to finish my studies first.”

The event is also a forerunner to the Imagine World Cup (also known as the “Software Olympics”) which will be held in Russia this year. “We’d love to win and be able to represent New Zealand, and I think we’ve got a pretty good chance.”