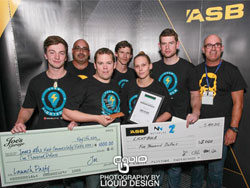 A team of University of Waikato students have won this year's Innes 48 hour Business Startup Competition and been awarded more than $30,000 for its platform called Spring.

Known as Team Lightbulb, the winning team was made up of Management students Michael Watson (BCS) and Greg Johnston (BMS Hons), along with Waikato Maths and Computing student Tom Lochore, and two non-students David Meaney and Tasch Garland.

Spring is an online portal which helps streamline the immigration application process for immigrants, offering them guidance and support, as well as advice from immigration advisors at just a fraction of the cost.

"In a lot of cases, immigration has negative connotations. And because we want to streamline the process we came up with the name Spring because it has positive connotations of new life and new beginnings."

Their prize is made up of $5000 cash, 12-week Lift pre-incubation programme worth about $15,000 run by Soda Inc, the Innes48 competition organiser, to help the Spring team prepare for business, a two-day brand and marketing course worth about $10,000 with Brainiacs, a free website to the value of $4,000 with free hosting and online marketing consultation, Waikato Chamber of Commerce Membership, 8 hours of PR work with Mandy Suess, $1000 towards a launch party and $100 to spend at the restaurant, Joe’s Garage.

At the competition, teams had 48 hours to create a business model which fitted with the theme this year, addressing global challenges. This year 75 teams entered.

Michael heard about the Innes48 competition through Tom, who had placed second as part of a different team at Innes48 last year.

He said the team were really passionate about winning and so were careful who was chosen to be part of the team.

"What we ended up with really was the dream team. Everyone had specific skills and areas of expertise, which was invaluable."