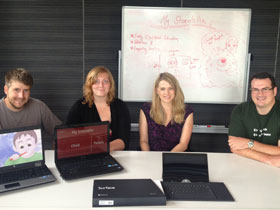 A team of University of Waikato students have made the final of the 2013 New Zealand Microsoft Imagine Cup by developing an app to help absentee-parents maintain relationships with their children.

The Microsoft Imagine Cup, the world’s largest technology competition, invites tertiary students from around the globe to create software using Microsoft applications to find real solutions to real-world problems. This year students were asked to choose from one of three categories; Innovation, World Citizenship, or Gaming.

The Cold Studios team of Ersin Buckley, Shawnee Kitson, Brian Cole and Marcel Beetz have created an app called My Storyteller, which is designed to bring families with one parent working away from home closer together. They are entered in the World Citizenship category.

“My Storyteller is designed to bridge the gap between caregivers and children in the busy modern world,” says team leader Brian Cole. “The app allows caregivers to record themselves telling a custom story to their child while overseas, which is then sent home through the internet and can be played back at any time.”

Inspiration from the military

The idea came to him when reflecting on his years in the military, and how he would miss pivotal moments in his children’s development.

“When I was in the military for months I would be sent away from home. I’d come back and see what I missed out on, for example I saw my son crawl for the first time on Facebook.

“People are missing out on a huge chunk of time with their children and this is a way of using new technology to help them still be a part of their children’s development.”

The app would be particularly useful for families with one parent on FIFO (fly in fly out) work, nightshift workers, or any situation where one parent is absent for a period of time, says Brian.

They’re one of two University of Waikato teams to make the final.

The Microsoft NZ Imagine Cup will be held in Auckland from 24-25 March. Teams present their apps in front of a panel of judges and on the second day are given the opportunity to talk to investors and industry VIPs.

The event is a forerunner to the Imagine World Cup (also known as the ‘Software Olympics’) which will be held in Russia this year.