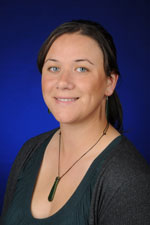 Carey, who is of Whānau-a-Apanui and Tūhoe descent, will be one of many staff members competing in the biennial competition which is expected to see more than 40 kapa haka teams compete.

This year, Carey will be leading the group Te Whānau a Apanui, and with four Te Matatini competitions already under her belt she is no stranger to getting on stage.

“This year will be different because it will be the first time I lead the group. We have been practicing every second weekend from September to October, then from November onwards we started practicing every weekend.”

Keeping it in the family

Carey travels four hours to Omaio Bay, 50km north of Opotiki, with practices often running from morning to night. It’s a big commitment, but Carey says she’s fortunate to be amongst her family who are performing in the same group.

“My brother will be leading Te Whānau a Apanui with me, and I also have cousins in the same group. My husband is performing in another group as well so it’s good to have close family involved.”

Competition for Te Matatini is fierce, with some other groups implementing compulsory fitness regimes in order to perform at their peak. For Carey, making sure she’s prepared both mentally and physically is very important.

“Our group has our own practice regime ensuring we are as prepared as possible and we do a lot of work ranging from voice preparation through to physical preparation and it is a lot of hard slog!”

The University of Waikato is a strategic partner with Te Matatini which takes place 20-24 February at the Rotorua International Stadium. For more information visit the official Te Matatini website.

View more information on the University’s involvement at Te Matatini.