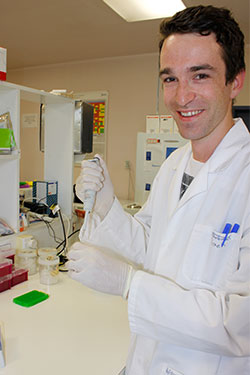 Scholarship recipient: Waikato University student Zach McLean gets to work in the Reproductive Technologies laboratory at AgResearch, as part of his research project funded by a $5K LIC scholarship.

The scholarship will go towards a Bachelor of Science (Honours) (BSc(Hons)) research project working alongside Dr Bjorn Oback  and the Reproductive Technologies group at AgResearch.

The project will involve investigating genes associated with the genetic network regulating pluripotency in bovine embryos. Pluripotent cells are able to produce all cell types in the body and emerge during early preimplantation development.

“My project will contribute to the aim of capturing this population of cells within the early embryo. Once captured, we wish to derive so-called embryonic stem cells from this cell population. With these cells, valuable genetics of elite cows could be stored in a petri dish and used to speed up the breeding process. In the future, this accelerated breeding will lead to animals with desirable traits such as a higher milk yield or reduced methane production,” says Zach.

Zach completed his Bachelor of Science (Technology) (BSc(Tech)) with a double major in Chemistry and Biological Sciences last year at Waikato University and will continue this year with a BSc(Hons) focusing solely on Biological Sciences.

During the BSc(Tech) he completed two work placements. “In my first placement I was in a water testing laboratory at SGS in Waihi, during which I used analytical techniques to analyse a number of samples from the Waihi gold mine. In my second placement I undertook a project at AgResearch, in the Reproductive Technologies group. This involved research using a number of molecular biology and embryology skills and ultimately led me to my post-graduate research topic.”

A former Tauranga Boys’ College student, Zach decided to study at Waikato following an impressive visit to the Faculty of Science and Engineering. He says that financially is was also the best option, due to the School Leavers Scholarships available.

In the future Zach plans to undertake a PhD, before venturing into a career as a research scientist in the area of molecular biology.