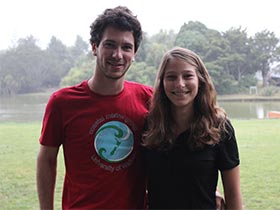 Two French engineering students decided the University of Waikato would be a good place to spend part of their gap year. Nina Saulnier-Blache from AgroParisTech and Alexandre Garcia-Cousteau from Ecole Centrale de Nantes have just spent six months at Waikato as interns.

“The focus of my study is agri-engineering, and I had read a lot about Professor Jacqueline Rowarth,” says Nina. “So I contacted her and asked if I could spend some time researching at Waikato Management School. With my main interest being environment and economics, the study she suggested – economic and environmental impacts of effluent management of dairy goats and dairy cows – exactly matched my aims.”

“Having Nina as an intern was a pleasure,” says Professor Rowarth. “She chose to do some very interesting research and also took every opportunity to find out more about New Zealand agribusiness. She attended seminars and field trips and came back from each of her ‘scenic’ excursions at weekends with questions. Her research is being published in various ways and she has set a benchmark herself in terms of performance.”

Professor Rowarth now has another student from AgroParis Tech arriving in March and another in September.

Nina and Alex went to school together in Toulouse before choosing to study at different French institutions. Alex studies oceanography and he knew a student from Nantes who’d been to Waikato before him. Alex contacted Dr Julia Mullarney in Earth and Ocean Sciences and was happy to accommodate him.

His internship involved producing a hydrodynamic model for Tauranga Harbour. A hydrodynamic model is a tool able to represent the motion of water and Alex studied currents in the harbour after the 2011 Rena grounding to see the effects of the grounding and measure the impact on more sensitive harbour sites.

“My degree is quite general, so it was good to focus on something specific while in New Zealand. It involved a lot of reading and processing of a huge amount of data,” Alex says.

Dr Mallarney says Alex used new high resolution data to produce a new grid for Tauranga harbour, which will form a base for a lot of research projects. “He did a huge amount of work, but also got out into the field. He’s provided us with material we haven’t had before.”

Meanwhile, when they weren’t studying, Nina and Alex made the most of being based in the central North Island, exploring something different every weekend. They also found time to walk the Kepler, Abel Tasman and Tongariro tracks university breaks.

The couple has now moved to Chile where Nina has secured work at a vineyard. “We had a fantastic experience in New Zealand. We’ve told a lot of people about Waikato University and have recommended they do internships there.”

A productive gap year is licensed under a Creative Commons Attribution 4.0 International License.