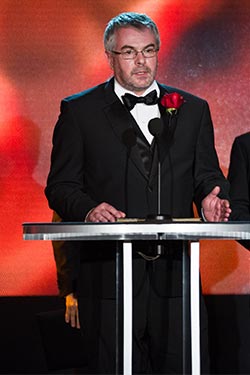 University of Waikato alumnus Jon Allitt was recently in Hollywood, enjoying a celebratory drink in the lobby of a Beverly Hills hotel.

He was celebrating because he’d just been honoured by the Academy of Motion Picture Arts and Sciences (yes, that Academy) with a Technical Achievement Award.

Jon Allitt, alongside Weta Digital colleagues Martin Hill and Nick McKenzie, received an award for the creation of the spherical harmonics-based efficient lighting system. This technique was developed to allow for more efficient computation of complex lighting in computer graphics and was originally developed for James Cameron’s Avatar, which won the 2010 Academy Award for Best Visual Effects.

After the initial presentation of this technique, it was used in the creation of visual effects for many Oscar nominated movies, including Iron Man 3 and The Hobbit trilogy.

How does an ex-Tauranga Boys’ College student find himself on the Academy Award circuit? Jon says it all began with a childhood fascination with making movies which, combined with his Waikato education, led to his current role in computer graphics with Weta Digital in Wellington.

“When I was a kid watching TV shows like Thunderbirds, I just knew there was all of this amazing stuff happening in the background, this sort of magic that was making it all come to life,” says Jon.

Jon finished high school early and enrolled in a Bachelor of Science, majoring in Computer Science, at the University of Waikato in 1983. This was well before the days of Adobe Illustrator and Photoshop.

It was at Waikato that Jon developed his passion for computer graphics.

After graduating in 1987 Jon continued developing computer graphics applications for computer animation for TV commercials and using rendering and animation software he had developed.

Since 1998 he’s worked at Weta Digital on the visual effects for many well-known movies, including The Lord of the Rings trilogy, King Kong, Avatar, and most recently Peter Jackson’s The Hobbit trilogy.

“Much of my work at Weta includes developing computer graphic rendering processes and the use of artificial intelligence for generating crowd shots, like in the big battle scenes with thousands of characters in The Lord of the Rings films,” says Jon.

“In the future with these kind of shots we’ll be able to render with more fidelity, making it less time-consuming and less expensive. Reality will become more achievable without having to rely so much on conventional filming techniques.”

What did it feel like to stand on stage in Hollywood to accept an Academy Award? “It was pretty surreal, says Jon. “You’re in front of a thousand people, producers, directors and technicians - the pioneers - that worked on the greats like 2001: A Space Odyssey.”

It wasn’t the standard Hollywood bash after the awards ceremony for Jon. “We went to the bar in the hotel, had a gin and tonic and went up to bed. We were pretty tired!”