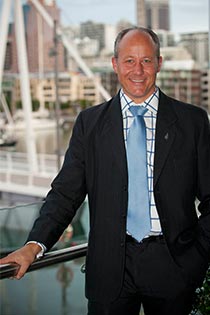 Aduro Biopolymers appointment: Darren Harpur has been appointed as the new Chief Executive for the Hamilton-based research, development and manufacturing company.

Aduro Biopolymers was founded in 2013 with a mission to be a key part of a greener solution being sought by companies around the world. Manufacturers and consumers alike are interested in reducing the impact of plastics in the environment, and of industrial processes in their local communities. The enterprise is a spin-out of WaikatoLink Limited, the commercialisation and technology transfer company of the University of Waikato.

Harpur, formerly a Commercial Manager at WaikatoLink says, “2013 was a pivotal year for the company. I’m very pleased to take up the role of Aduro Biopolymers’ first Chief Executive as we work to commercialise our first products for the market.”

“The company is now in a unique position to capitalise on recent research in the field of bioplastics as well as developments in the use of imprinted polymers for industrial waste remediation, and the targeted filtration and recovery of chemicals, metals and other substances. We’re working on a number of exciting opportunities.”

Aduro Biopolymers is investigating the feasibility of establishing a New Zealand plant to process poultry feathers into a range of products, including polypropylene and polyethylene filled resins with an international company.  The company is also in the final stages of a product development program using its proprietary Novatein® bioplastic resin, for applications within the red meat industry.

Aduro Biopolymers has also recently signed agreements with Scion for the commercialisation of bioplastic resins using fruit residues, and with Hamilton based company Ligar Polymers to manufacture imprinted polymers.

Aduro’s proprietary bioplastic resin Novatein® was developed at the University of Waikato’s School of Engineering by Chemical Engineer Dr Johan Verbeek and his team. Verbeek was recently named as the winner of the University’s inaugural Commercial Research Excellence Award, and is Aduro Biopolymers’ R & D Manager.

Innovative science to the marketplace

Duncan Mackintosh, Chief Executive of WaikatoLink says, “It’s really satisfying to play a role in transferring highly innovative science from the University to the marketplace. Aduro Biopolymers’ has created a compelling proposition for potential partners and customers and attracted strong commercial interest.  This appointment represents the next growth phase for the company.”

According to Harpur the potential of the company is significant. “The global plastics market alone is worth over a trillion dollars and currently bioplastics represent 5-10% of that market and is growing quickly.”