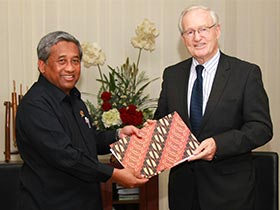 More Indonesian students could be benefitting from studying at the University of Waikato following the signing of a significant agreement in Jakarta recently.

On 15 May the University signed an agreement with Indonesia’s Ministry of Education and Culture which opens the door for Indonesian postgraduate and doctoral students to study in Hamilton.

The agreement was signed by University Chancellor, the Rt Hon Jim Bolger, Professor Supriadi Rustad from Indonesia’s Directorate of Higher Education, and Indonesia’s Minister of Education and Culture Mohammed Nuh.

Focusing on connections with ASEAN countries

“This is a significant partnership for the University of Waikato. We are increasingly focusing on our connections with ASEAN countries and Indonesia plays an important role in the Asia-Pacific region. It also aligns with our strategy to implement a comprehensive programme of internationalisation and will help us attract top quality students.”

While in Indonesia, the delegation also signed a Memorandum of Understanding with Airlangga University and hosted an alumni event in Jakarta, attended by more than 100 people, to mark the University’s 50th anniversary. It was attended by about 60 alumni and friends.