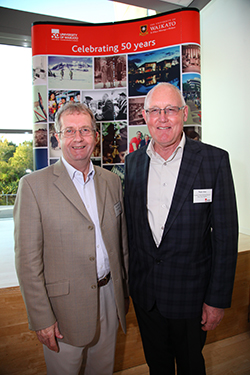 Waikato alumni reconnected and reminisced with old friends at a well-attended event on Saturday, following on from the University of Waikato’s Community Open Day.

Nearly 200 guests gathered in the Gallagher Academy of Performing Arts on campus to catch up with old classmates and lecturers at an event to celebrate the special history of the University and 50 years of teaching and academic excellence.

A university for the people

Vice-Chancellor Professor Roy Crawford said the university was unique in that it was established by the community, for the community.

“The University of Waikato is different to other universities in that it wasn’t established by the government. Rather, the people of the Waikato saw a need for a tertiary institution in the region and set about making it happen,” he said.

“In a relatively short time period, we can proudly say that we are now ranked in the top 2% of universities in the world; we have internationally recognised schools of study, and can enjoy in our last year of being under 50 years old the honour of being ranked 44th out of 5000 universities under 50.”

Among the guests on the evening was the university’s first graduate, Peter Allen, who was one of 19 capped in the first graduation ceremony in 1967. A special reunion for those who studied during the early years – 1964 and 1965 – was also held on campus during the day.

Guests also heard from recent science alumni Josh and Zac Lyon, whom the university is supporting on their expedition to cross the world’s four major ice caps – Greenland, Patagonia and the North and South Poles.

To view photos from the event, please click here.