Award for research into transnational crime 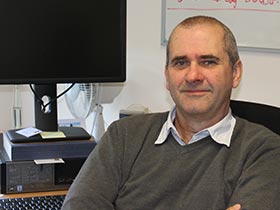 A chance meeting on Robben Island, outside the prison where Nelson Mandela was held for 27 years, has led to a profitable and rewarding collaboration for Waikato law professor Neil Boister.

Professor Boister has been awarded a Freidrich Wilhelm Bessel Research Award by the German-based Alexander von Humboldt Foundation in recognition of his achievements in international and transnational criminal law research.

He was nominated by Dr Florian Jessberger, professor of criminal law at the University of Hamburg, Germany. “I was visiting Robben Island in 2001, and it just so happened that Florian was there too. He knew the friend I was with, we got talking and since then I have visited Hamburg and we are now planning to work on a project on the EU’s influence on the development of transnational criminal law,” says Professor Boister.

The research Friedrich Wilhelm Bessel award is worth €45,000 per annum and in addition, the award winners are invited to carry out research projects of their own choice in cooperation with specialist colleagues in Germany.

Professor Boister will travel to Germany in November initially for a period of seven months followed by shorter periods, and work with Professor Jessberger, researching how the European Union is spreading its ideas on criminal law world-wide.

“The EU is quite advanced with its laws around corruption, money laundering and cyber-crime, so I’m curious to know how it’s pushing those beyond EU boundaries. New Zealand tends to follow global legislative trends in regard to transnational criminal law so ultimately changes pioneered in the EU usually do have ramifications for us,” says Professor Boister.

One of the significant benefits of the award is that it introduces a recipient into the network of ‘Humboldtians’, a group of internationally recognised researchers from across the full range of disciplines who maintain regular contact and meet annually.

Award for research into transnational crime is licensed under a Creative Commons Attribution 4.0 International License.