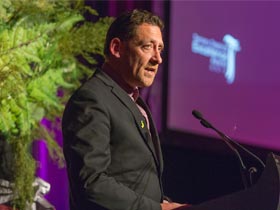 It should come as no surprise that Enoka Murphy was last night presented one of the highest awards available for tertiary teaching.

At a ceremony in Wellington, the te reo Māori and tikanga lecturer from the University of Waikato’s School of Māori and Pacific Development received a Sustained Excellence award for teaching in a kaupapa Māori context at the Ako Aotearoa Tertiary Teaching Awards.

The award comes just a year after he picked up a Faculty Teaching Excellence Award from the University.

Murphy, (Ngāti Manawa, Ngāti Ruapani, Mātaatua, Tainui, Te Arawa) says winning awards is not what he’s about “but you get pushed into these things”.

“The loyal thing to do is to say yes.”

Murphy’s life has been about education since the beginning.

His parents were teachers and “I’ve been teaching since I was 15 or 16. I finished School C and started teaching”.

He’s taught in kohanga reo, kura kaupapa Māori and at tertiary level, along with being involved in theatre, kapa haka and speech competitions.

Teaching te reo, he says, is not like teaching any other subject.

“It’s not just getting up in the morning and going to work. We’re part of it. Te reo is at the core of the reclamation of our language, our culture, our rights. Without language, it is so much more challenging to have a culture.”

“In a single day you can achieve so much.”

While Murphy would be happier not being in the limelight, he recognises the importance of the award and says it’s not just for him.

“There are excellent Māori teachers all over the place who won’t go for this sort of thing unless they are pushed. There are people who have been doing this for 50 years and they are awesome. People like Wharehuia Milroy, Timoti Karetu, Huirangi Waikerepuru and many others. I can jump around and make cool games and great resources whereas they can just sit in a chair and speak and every student will hang off their every word. This is as much an acknowledgement of them.”

“The whakama, I’ll get over that.”

The Ako Aotearoa Tertiary Teaching Awards aim to recognise and encourage excellence in tertiary education, at a national level.

They provide an opportunity for teachers to further their careers and share good practice in teaching. Up to 12 Sustained Excellence Awards of $20,000 each are awarded annually.