Back to Asia for Ryan on Prime Minister's Scholarship 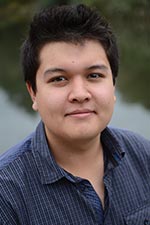 Scholarship recipient: Ryan Vernall has been awarded a Prime Minister’s Scholarship for Asia.

While chicken feet and pig’s trotters might be on the menu in Hong Kong, Ryan Vernall isn’t sure he’ll be eating them on his six-week summer school exchange to the Chinese University of Hong Kong.

The University of Waikato student is a recipient of a Prime Minister’s Scholarship for Asia, and is in the final year of a conjoint degree, studying a Bachelor of Management Studies and a Bachelor of Laws.

Ryan says he applied for the scholarship because he wanted to gain experience in Asia and hoped it might open doors for him to work there in the future.

“I was really pleased to get the scholarship. I knew lots of people had applied for it so I wasn’t sure if I had a chance, but if you don’t try, you have a 100% chance of not getting it, so I thought I’d just give it a go.”

During the exchange, which begins at the end of June, Ryan will live in the halls of residence and study two papers:  Asian Business, and Regional Cooperation and Integration in East Asia.

“I knew the Chinese University of Hong Kong was highly ranked and that’s why I wanted to go there. The programme is an international mix of students and lecturers, so it will give me the chance to meet new people and make good contacts.”

Growing up in Jakarta, Singapore and Bangkok due to his father’s role with Tetra Pak, Ryan says he already has an appreciation of Asian culture and is looking forward to experiencing more of it, especially Cantonese food.

Back to Asia for Ryan on Prime Minister's Scholarship is licensed under a Creative Commons Attribution 4.0 International License.