Best ideas can come from the public 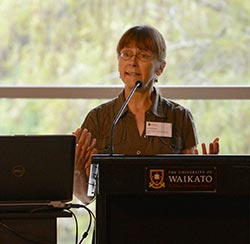 Public engagement at Waikato University: Dr Lyn Kathlene from the Spark Policy Institute in Denver was one of the keynote speakers at an international symposium hosted by the University of Waikato.

Listening to the public can yield the best ideas, says one of the keynote speakers from a recent international symposium held at the University of Waikato.

The symposium, held on 17 and 18 February, was aimed at transforming public engagement on controversial science and technology.

One of the keynote speakers, Senior Research Associate Dr Lyn Kathlene from Spark Policy Institute in Denver, spoke on citizen engagement and the most effective ways of obtaining useful feedback on public policy.

Dr Kathlene says the process of involving citizens in public policy making is about trying to move away from the theory or model.

“Stop, reflect, listen, get uncomfortable and start putting on your creative hat to work with what’s in front of you in order to get citizen participation in public policy.”

She says it’s important to involve people in the process, but they need enough information to feel comfortable about engaging, and they need to see how public opinion is valued by those people who are trying to influence the public.

Dr Kathlene says that sometimes the best ideas came from the public, as in the case where changes were being considered to the transportation system in Boulder, Colorado.

“We found the public identified an issue that was very important to them that the planners hadn’t even considered, and this was implemented as part of a new transportation plan for the city.”

The symposium, which was funded by a Marsden grant, brought together people researching in various disciplines, including science and technology, social sciences, the arts, humanities, public policy and communication.

Best ideas can come from the public is licensed under a Creative Commons Attribution 4.0 International License.